“Unhappy with a new treaty, Federation Colonists along the Cardassian border have banded together. Calling themselves ‘The Maquis’, they continue to fight the Cardassians.  Some consider them heroes, but to the governments of the Federation and Cardassia, they are outlaws.”

Flung halfway across the galaxy, the USS Voyager crew must find a way to work with a renegade crew of Maquis to find a way home.

We watch as the two ships, Maquis and Starfleet, are whisked 70,000 lightyears away to the Delta Quadrant by a mysterious entity called The Caretaker. This entity controls an array that the Voyager crew disingenuously acts shocked and confounded by despite the fact that they just came from Deep Space 9 which looks eerily similar.

It certainly is not strange enough to provoke more shock than the act of being flung halfway across the galaxy!

We’ll forgive this error in judgment on the part of the writers though as they otherwise provide a solid and uniquely original basis for the Voyager installment of the Star Trek franchise.

The Caretaker’s Array vs. The Deep Space Nine Starbase…

As with all Trek stories the science is fascinating and highly prescient. The Caretaker is a sporocystian lifeform (a species called Nacene). They are explorers and their technology damaged the home planet of a race of humanoids known as the Ocampa. By removing the nucleogenic particles from the atmosphere, the surface of the planet was turned into a desert.

As a fundamental requirement for life as we know it, water is often taken for granted by those of us living in developed countries. Until you find yourself without water, it is usually accepted as something that will always be available freely and easily. Of course, that isn’t the case for everyone. The lack of safe, clean, potable, water not only retards growth and innovation, but causes illness, death, and untold suffering for those without.

“No one around here waste’s water in this manner!” 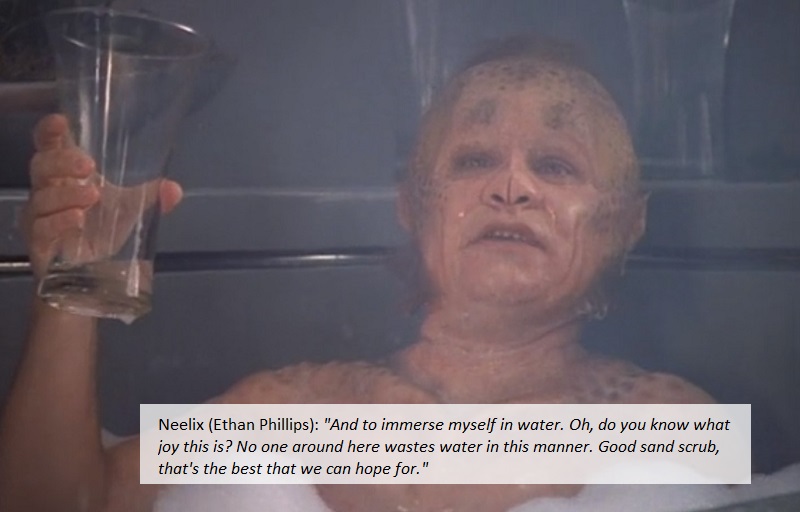 As a character, Neelix is very opportunistic. Not surprising from someone who has lost his home and family to what is the equivalent of nuclear war. Neelix spends his life living on his small ship scavenging space debris and scrounging supplies from the people he encounters.

Upon meeting the crew of Voyager Neelix offers his help in exchange for water. He plans to use the water to barter for the release of his love interest, an Ocampan named Kes who is being held captive by the Kazon-Ogla.

A sect of a violent warrior race, the Kazon-Ogla live in constant war with other Kazon sects for territory and resources. Originally kept as slave labor by the Trabe, the Kazon appear almost cartoonish and child-like in their dealings with Voyager. They currently control the surface of Ocampa and according to Neelix, they mine “the rich cormaline deposits” for trade.

Upon learning that Neelix has returned with water, the Kazon-Ogla leader, Maje Jabin, tells Captain Janeway that he would “be more interested in acquiring this technology that allows you to create water from thin air”. Janeway explains that the technology is integrated into the ship’s systems so that would be difficult. Perhaps hoping to create some goodwill by avoiding an outright refusal to trade technology.

According to Lieutenant commander Data of the USS Enterprise, humans are comprised of over 90% water. As such it’s easy to see that in a system lacking nucleogenic particles, access to water would be very powerful and the Kazon would view USS Voyager’s water creation technology to be a highly desired ability.

In the years since this episode aired our ability to pull water from thin air continues to improve.

I remember taking survival training when I was 13. We learned many things but what stuck with me the most was not to put up a tent under trees (since the staff forced me to move it) and how to get water out of thin air.

Okay, maybe not exactly thin air, but close. Condensation on non-poisonous plants is one of the few ways to get safe drinking water with no need of purification. There are many ways to do this. But what we did was:

And in the morning you have all the condensed water from the leaves that collected on the plastic and dripped into your container.

If you have water but aren’t sure it’s safe to drink you can use that same method to purify water via sunlight by turning your hole and plastic into a makeshift solar still. But that’s a discussion for another day and another Voyager episode.

Using a similar idea, scientists from UC Berkely have developed a water harvesting technique that, literally, pulls water out of thin air by using the higher humidity at night and higher temperature during the day. While this wouldn’t have solved the problems of the lack of nucleogenic particles faced by the Ocampans it certainly can help people here on earth in need of a safe, clean, source of drinking water. 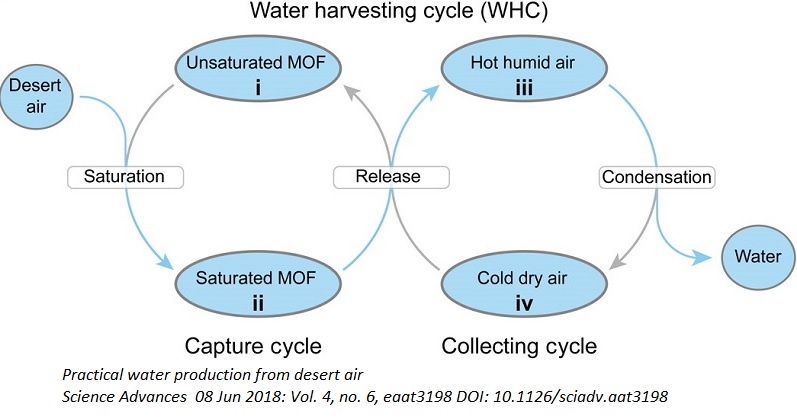 And on to the next… exploration… science… if you have anything you’d like to read about please comment below and I’ll work on it for you!

Captain Kathryn Janeway: “We’re alone – in an uncharted part of the galaxy. We’ve already made some friends here… and some enemies. We have no idea of the dangers we’re going to face. But one thing is clear: both crews are going to have to work together if we’re to survive.

That’s why Commander Chakotay and I have agreed that this should be one crew – a Starfleet crew. And as the only Starfleet vessel assigned to the Delta Quadrant, we’ll continue to follow our directive: to seek out new worlds and explore space. But our primary goal is clear. Even at maximum speeds, it would take 75 years to reach the Federation.

But I’m not willing to settle for that. There’s another entity like the Caretaker out there somewhere who has the ability to get us there a lot faster. We’ll be looking for her. And we’ll be looking for wormholes, spatial rifts, or new technologies to help us. Somewhere, along this journey, we’ll find a way back.”