This fan-made video is So. Well. Done. I mean, really, really, REALLY, well done! I’ll definitely be favoriting Lord Ricco 666 over on YouTube.

And since one can never have too much William Shatner… how about a revisit to his classic Rocket Man?

OH speaking of which… we were at a convention in San Francisco a while ago and there was a fan (wish I had his name! Anyone know him?) who did an amazing rendition of William Shatner… I mean it felt like we were watching the real thing only better. (Shh, don’t tell Bill.) I also wish I had a video of him but this still will have to do. If you know him or better yet if you ARE him please let us know!

Do you know this dude? Give him a shout-out in the comments! 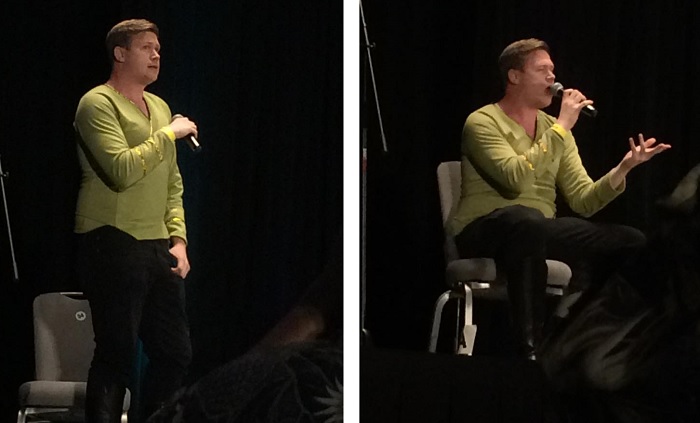 So anyway, I don’t know if you’ve been to a Creation convention before… but they usually have extra fan events and the stars that are available come and play along. This particular year they had a karaoke party open to all on Saturday night and this guy performed Rocket Man.

By the way… if you haven’t been to a Creation event? GO. Seriously. Just go. You can thank me later. Creation Cons are amazeballs. Everyone gets a seat in the main auditorium and tons of access to the guest stars and there are lots of extras like the karaoke party. One year they had a performance by Tim Russ at a special dance party for gold ticket holders so if you can swing it GO GOLD. But even if you don’t? You’ll still have the time of your life!

Oh sorry got distracted there. Ok. Here is the restored (thanks to Thomas Prislac on YouTube… my favorites list is growing) version of William Shatner’s classic Rocket Man!