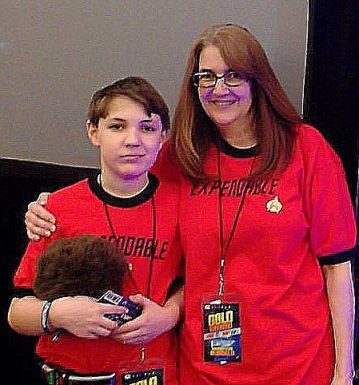 Welcome to There’s Coffee in that Nebula!

That’s my son and me at our first Star Trek convention in San Francisco. Boy, what a great community! Stars and fans alike all coming together to celebrate a fun fascination with all things Trek. (How do you like our “Expendable” red shirts?) So glad you’re here, be sure to comment if there is anything Star Trek (or even non-Trek!) you’re interested in and we’ll do our best to write a post just for you.

Pull up a com panel, have a seat in the captain’s chair, order up some Tea, Earl Gray Hot or some Coffee, Black, and let’s see what’s out there…  Engage!

I know that there is debate in the community about the latest installations of Star Trek. First, people objected to JJ Abrams and his alternate universe timeline and now people are objecting to Discovery… from its pay per view slot on CBS All Access, to its inclusion of sensitive language. But that’s ok!

After all, controversy is nothing new to the Trekverse.

The Original Series was a long shot from the moment Gene Roddenberry pitched his idea of a quirky spaceship named Enterprise and her crew of nerdy misfits.

And in which, when you saw someone in a red shirt, you just knew someone was going to die.

For the 1960’s it was a prescient blueprint that technogeeks with skill, imagination, and a whole lot of ingenuity, have followed ever since. From wristband communicators to cell phones and Apple smartwatches, from handheld devices the size of dictionaries to mini iPads, we continue to push the boundaries of what is possible.

The dream lives on…

Gene’s vision spawned TV shows and movies and inspired generations to create, explore, and, dare I say, discover, a brave new world of science and exploration. His vision is as relevant today as the day he first looked up and imagined The Enterprise flying across the sky of the future.

Welcome to Star Trek!
Welcome to There’s Coffee in that Nebula!
Live long and prosper!