Star Trek blasted through a lot of barriers when it hit the air in the 60s… not the least of which was including a black female in a strong leading role, Nichelle Nichols (Lieutenant Uhura in TOS). Gene Roddenberry didn’t do this out of any sense of political correctness or to prove a point, he simply did it because it was the right thing to do. He just assumed that of course there would be strong women of color in the future, why wouldn’t there be? (And we loved him for it!)

Whoopi to Levar Burton… “Dude I want in! I wanna do Star Trek!“

“Momma! There’s a black lady on television and she ain’t no maid!“

Over the years the two became great friends and reunited at the 50th-anniversary convention in Las Vegas. Nichelle Nichols tweeted out this pic wishing then President Obama a Happy Birthday… Do you do Twitter? You can follow Nichelle >here!< Seriously though… do you do Twitter? Comment and let me know! Guess I need to jump into that bird’s nest and learn how. tweet tweet 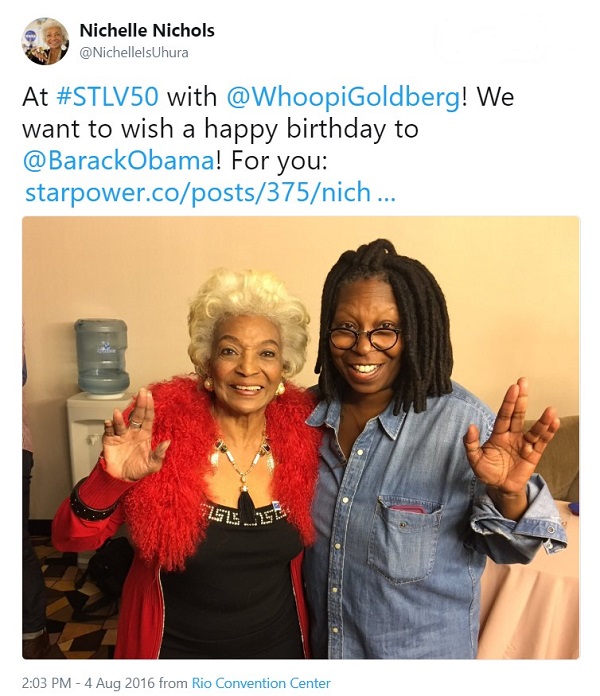 Nichelle Nichols appeared as Lieutenant Uhura in all of The Original Series episodes as well as the follow-up movies. In addition, she has appeared in multiple specials and voiced her character in The Animated Series.

Whoopi Goldberg appeared as Guinan in 29 Next Generation episodes plus the movies Generations and Nemesis.

I wish I could take credit for this video… from my favorite convention provider Creation Entertainment… who loves surprising fans (and their guests!) like this… thanks to DTrek55 on youtube for this one!